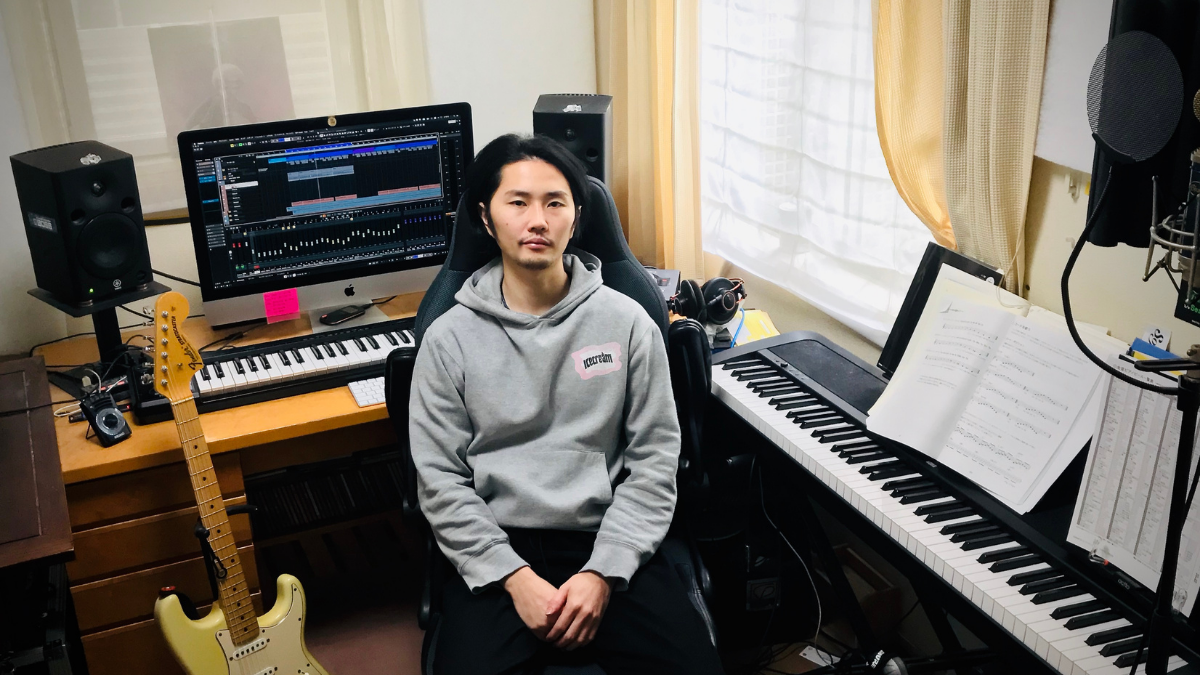 Freelance musician and producer with a passion for gaming, Currently located in Tokyo, Japan. Joji Katsuike is this month's ToneGym Hero!

My name is Joji Katsuike and I work as a freelance musician by the stage name PellyColo. I’m based in Tokyo, but I was actually born in Sydney (nationality is Japanese). Besides my original works, I compose/arrange music for artists/singers and other media.

I enjoyed listening to a lot of music since I was a kid, but never really got into playing an instrument until I begged my parents for an electric guitar when I was in middle school. They bought me a Fender fake which printed “Tender” on the headstock hahaha. I was into punk music at that time so I wanted to form a band with my classmates. As I started learning how to play, I realized that there is a particular chord that I really like, and discovered that it is a Major7 chord. I also realized that the music I hear on TV shows were mainly using major/minor triads. Then I started to think that chords with 7th or further extensions are not used so often in mainstream music (Japanese pop music to be precise) since they sound a bit complex or even dissonant for some people and that people tend to prefer them more emotionally straight forward songs.

I didn’t know much about music at that time so I’m not sure if my speculation was correct, but the teenage me began to reject music that are too triad-ish or emotionally straightforward as they sounded kind of cheesy (thinking back, maybe I didn’t like music that was too diatonic, or just simply cheesy). For that reason, I focused on the aesthetic behind the composition since I truly think that musical choices reflect one’s philosophy.

To evaluate and explain my idea in a musical vocabulary, I really should have studied music at this point, but I was a kind of a guy who “plays by feel” so never went on the academic side. I just want to say here that I always had this weird, uneasy feeling during my teenage.

Years passed and I got my first DAW when I was around 20. Since I was a big fan of video game soundtracks, I decided to apply for a composer post in video game companies. Sadly I barely had any musical knowledge and skills so none of them took me. It was after I  started posting my music on SoundCloud that I gradually got exposure. I remember my first job was making music for the Japanese girls group “Especia”. Some people still know me for their works. Luckily, I eventually got music job offers from other people, but I faced a real struggle when I was asked to play guitar for a famous Japanese musician “Wakadanna”. Since I was still a “play by feel” guy, I had difficulties in playing various styles of music, as well as reading chord charts.

For the first time, I thought that I seriously need to study music if I am going to make it my career. It in fact was a miracle that people asked for a guy like me to make music. Maybe I really did have some of the “feel” that people like, but I realized that isn’t enough to make music a job So I started practicing guitar alongside studying music theory and ear training. It in fact is still only about 3 or 4 years since I began all this, but I feel lucky that I found something that I can devote to in my mid-30s. 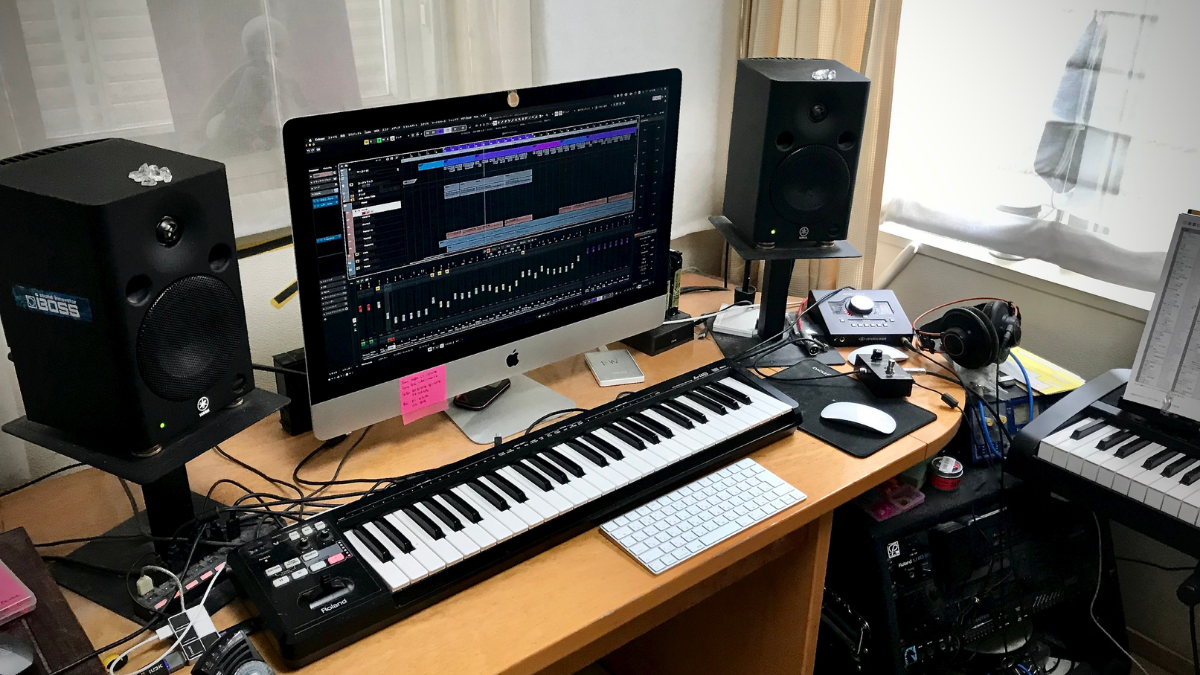 This is also why I found ToneGym and SoundGym. Although self-taught, I do feel an improvement, so I’m going to continue training at least until I can consider myself a decent musician. Btw, I think triads are great right now because I realized that they are actually far more interesting than I imagined. In any case, relating chords to emotions was a good skill that I earned as a teen. Of course, it’s easy to say major is happy and minor is sad, but I think it all depends on the context. Nothing is that simple. Looking at music in such a way also relates to how I perceive the world. It doesn’t necessarily have to be music, but diving deep into something makes a new connection to the outer world. Maybe this is the biggest reason why I got into music. Counting from the day that I got my first DAW, it’s about my 15th year of music-making (but I’ve wasted a lot of time in the middle!).

I like watching video gameplay movies (especially Street Fighter 3 3rd Strike) on YouTube. I used to play a lot of video games when I was a kid, but don’t really have the time right now, so I watch people play instead. It also helps me discover other cool music. I also do a little bit of karate and kickboxing. Before the covid-19 pandemic, I used to go to a kickboxing gym and work out. Now I do jump rope and shadow boxing at a park nearby instead. Going to Sento (public bath) is another choice. I don’t know if this is true but getting in a really hot bath (around 45°C) and then cooling down with a cold bath helps maintain your autonomic nervous system. It seems to work also with tinnitus which I’ve been suffering from for years. 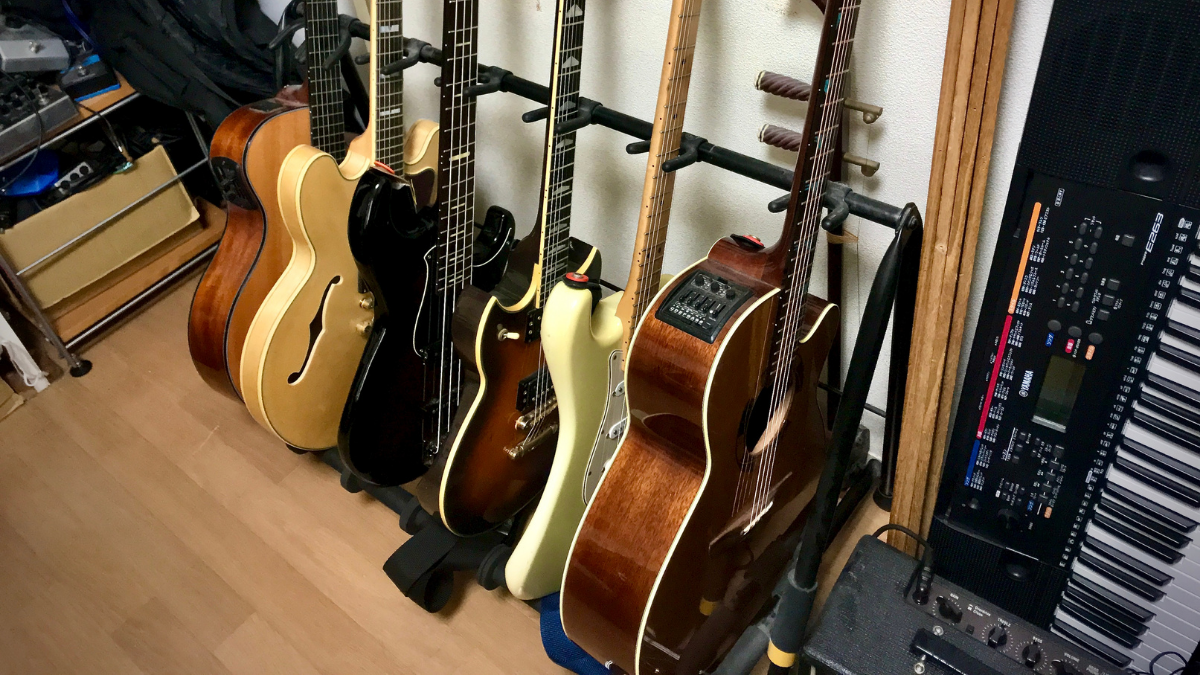 I can punch hard walls without feeling much pain. Back in my karate days, I trained my knuckles quite hard.

I just want to become a better musician. But to do so, I need to learn tons of things such as playing various instruments, DAW manipulation, mixing and mastering, music theory, ear training (of course!), etc. I know that music is not all about skills and knowledge, but I also know that it could definitely help me explore new sounds.So I want to know what my music would be like at the different stages of my music skills.

I’m feeling that there is no goal because every time I learn or achieve new things, I notice other things that I’m missing. I’m constantly going through these ups and downs, but if I end on a down, I will just be crying miserably. I don’t want that, and this feeling is forcing me to continue making music. Oh, and I forgot, above all, it’s simply fun.

I’d say Jun Fukamachi. He is a Japanese composer and I actually discovered his music a few years ago (shame on me). His sci-fi jazz fusion-esque works really inspired my production, and I would love to talk to him about his approach to music. I actually thought about doing so but found out that he passed away in 2010. Jun Fukamachi - Starview HCT-5808

I don’t get on the stage that often so I will answer this as a music production session. I’m actually making my music as a theme of a story that I made up. It’s a sci-fi story, a bit like Star Wars. I’m not going to get into the details since it’s just a rough plot (and embarrassing), but I basically make music for this imaginary story. This way, I can make new music every time I think of a new scene. It also helps me go beyond the border of genres.

In terms of the actual composition procedure, I usually start off by thinking of a chord progression, but I actually want to get out of this habit because it kind of locks me up. I want to be able to look at the bigger picture of what I‘m trying to compose, and freely express the music. That underwater-like feeling is really frustrating.

I’m working on my next album. Here’s a snippet of the rough edits if anyone is interested. What I’ve been learning is starting to come together so I’m really excited about how this album is going to turn out!

Also, here are some of the works I did last year:

Frankie Knuckles - The Whistle Song, The smooth groove explains my character a little bit. I don’t really go for a drastic change but rather prefer gradual and certain changes that come from reason. And I simply love the heavenliness of this track. I want this to be played at my funeral.

Guitar. Love how they sound and look. It’s also the instrument I’m most comfortable playing. I now own 3 electric (Fender Strat, Yamaha SG1000, Epiphone Sheraton2) and 2 acoustic (Takamine Santa-fe, Yamaha nylon). I used to have a Tele, which was the first guitar I bought doing a part-time job. When I was in high school. Unfortunately, it broke over time, so I’m planning on getting a new one. Can’t stop surfing the internet!

“Daily workout”. It’s a real good way to start off the day. Since the games are picked randomly, I’m forced to try the ones that I’m not so good at. There’s no escape, which means I have to get used to it. It’s like you can’t skip leg day. I also like the “Learn” section because it has a good collection of tutorial videos. I’m currently watching the orchestration series because I recently bought a cheap flute just to play for fun. It was my first experience playing a woodwind instrument and I’m shocked to find out that I can’t even make a sound on it. I’ll keep practicing until I can make an okay recording of it.

What does the future hold for Joji Katsuike?

I really hope for a lifelong continuation of my music career. I also wish that I can make music for a video game someday. Other than that, stay healthy and keep learning. 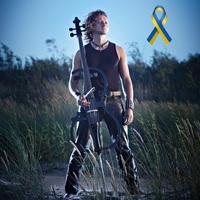 DanielS _
Feb 17
I really like your story, it's a bit funny because...I spent 3 years at boxing ring trained kickboxing too and I'm still falling in love with this sport!
5 props 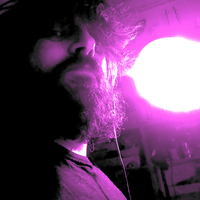 Cuantasvacas -
Feb 17
Pleased to meet you, Joji! I like your determination to pursue a long musical career, and I can only wish you good luck. BTW, that old "Tender" would look awesome hanging on the wall right between SoundGym's "Pelecaster" and ToneGym's "Gibtone"... ;)
2 props

Colin Aiken
Feb 17
I really liked your observation regarding chords and emotions. I would only offer that you should go easy on punching walls. You need your hands to play your guitars! Congratulations on receiving this honor and I wish you the very best luck with your career. May it be long and rewarding.
2 props 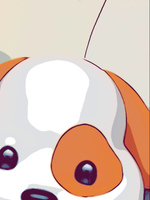 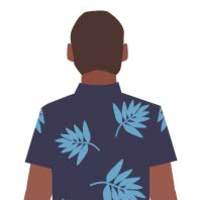